Conversations with the Dead

With every passing day of life and despite the integral presence of the mundane, (which is nice but I don’t always appreciate it) the thought that I am here for a limited period of time has not failed to cross my mind several times. I am still trying to grapple with the purpose of life, the basic reason for my existence and of course where am I headed from here.

I have been immersed in the sacred scriptures, they are the source of all wisdom that has percolated into my mind. They are extremely enlightening in their poetic realm and yet I feel the lacuna, that I am not doing enough to answer this very deep and pertinent question. It has been even louder ever since two individuals left their earthly states, one who I loved dearly and one who I didn’t. They both affected me, in good and not so good ways. One ensured she remained relevant emotionally to me and the other ensured she messed with me completely, not intentionally though. They have left without a trace, owing nothing to the world and probably never to be remembered again. They had little to share materially and yet they had a significant impact on my mind.. the living mind. To keep it simple, let me refer to them as the good one and the lost one.

What intrigues me is not just their exit, but the way they left their earthly sheath. The good one led a life of authority, keeping her herd together, ensuring the “family” didn’t break into nucleus bits. She guarded her fort ensuring no trouble from the outside and ensuring no trouble from the inside though she did come with a bus load of bias. She made rules and we toed the line. For all her autocracy which did get to her children at some point as they took pleasure in letting her know she needed to withdraw rather than govern, she did what she had to despite the inner opposition. Blamed, defamed and shot at almost every day, she ensured her pack stayed close to her taking all the brickbats in her stride. What mattered to her was a homogeneous family though that rule had started to fade quite a bit. What may have looked like an old age of turmoil, culminated into the most peaceful death within half an hour. She suffered no disease, she simply gave in to the call of death when it came… yes she had been waiting, we all had been waiting. She had not been super spiritual, she had deep attachments and she ensured she fed that desire well. She had outlived her time and yet it was the most peaceful exit that unfolded in front of our eyes. I held her hand one last time before she turned cold, she had left but her body remained plugged in at the hospital… just the mass of flesh breathing, the consciousness that was her had found its way out of her earthly sheath already.

In contrast, the lost one had been nothing but a trouble maker and maybe she didn’t even know how much of a trouble maker she was. She had given sleepless nights to many, created chaos in households and believed she wasn’t wrong at all. Spinster till death, she proclaimed to be the mystical one, the spiritual one and yes, we have crossed swords in the past. She defined her life differently, scoffed at the institution of marriage and the fall out that are children. Men were still her prey, and she craved for that attention. And yet, spiritualism for what ever reason was her definition of who she was. A master at communication with a charm that I could die for, yes she had a presence that couldn’t be ignored no matter how much I tried to push her out of my world. She came to haunt me in the weirdest of ways. For the spiritually inclined and one who had dedicated her life to Arunachala, apparently, her passing was a hell only she would have known how much she was subjected to. Lonely, misguided and with a host of physical ailments she fought her last war with the God of death, screaming her way through uncontrollable pain before she succumbed. She left me even more baffled, as the news of her last days trickled into my world. How or why was a person so mesmerised by the spiritual given such a torturous death?

It has been a while since the passing of these two women, and yet their last days remains etched in my mind, keeps me speechless and makes me wonder about what impact the nature of the passing has with respect to the life we have chosen to lead. I wouldn’t believe it if we said, we have no control… we have all the control, we just need to define how we want to use it. It would be naive to believe that the one who was seeped in attachment of the family should have been granted a more painful death than the one seeped in spiritualism. And yet the reverse logic made me sit up and think, what exactly is the purpose of life and does it have an impact in the method of what death is inflicted on us. Death has intrigued me a lot more than life, and I have contemplated endless hours on the connect between these two realities. The life I live is incidental, what I make of my death is more important. And if I have to ensure the peaceful exit that I crave for, what would it take to fix the remaining of my life while the clock ticks on.

I am still thinking, while the loud mundane shows its glamorous self to me I am trying very hard not to be enamoured by its presence. The silence that beats within my mind while I watch the chaos outside, is something I want to explore more… the answer lies there. I am here, you are here, we have a relationship undefined. Is there more to this connect or are we just spending our time coping with the mundane around us… its a decision we need to take, now, seriously to ensure a little that we have some answer to our earthly presence before we let go this sheath. The question really is do we fight the Lord of death, or embrace him.

Posted by Kavitha Kalyan at Saturday, March 16, 2019 2 comments: Links to this post 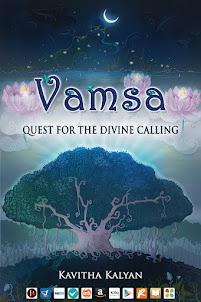 Quest For The Divine Calling

It is another busy day, as bustling crowds offer flowers and coconut, seeking the Lords blessings to bring less trouble and more happiness i... 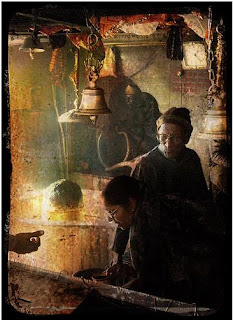